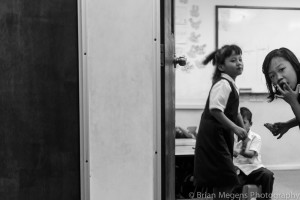 The suppression by the military regime (1962-2011) in Myanmar caused many minorities to flee the country, with the majority (92,263 registered) going to Malaysia. However, Malaysia only grants temporary asylum to refugees, meaning that the Burmese refugees are left in uncertainty, waiting for final resettlement to a country that accepts them. In the mean time, the Alliance of Chin Refugees (ACR) learning centre provides education for Burmese refugee kids in order to give them a better chance in their new country. The hope for change in Myanmar is sparked by the first partial free elections in 2015 that might mark the end of and era of suppression.

I went to the Alliance of Chin Refugees (ACR) learning centre where Burmese refugees receive education. The serie is called ‘Burmese Refugees in Malaysia’ and attempts to humanise the term ‘refugee’ and show that they still find joy in life despite going through heavily traumatising experiences.