Project: The Other Side of Palestine

In January 2016, I was in the West Bank to work on my photography project ‘The Other Side of Palestine’ wherein I captured the life of the Palestinians. I covered several subtopics in different parts of the country. Each city has their unique stories as every area has different experiences of the conflict. With my project I aim at giving people an insight in how life is in the West Bank, and by doing so give the country and its people a bit of humanity back. During my whole stay in Palestine I was generously hosted by locals which enabled me to get a first hand insight in their lives.

As sensation sells, the conflict is often portrayed by the media in its most violent way leaving contextual information aside. An example that I found while reading more into the conflict was the way Palestine is being named. In human right reports, Palestine is consistently referred to as Occupied Palestinian Territories (OPT) this name gives a clear statement on the situation. Exactly this information is often missing in media coverage giving a whole different dimension to the conflict. Due to this non-contextual and often violent news coverage, a stereotype of ‘the Palestinian’ is created. Throwing rocks and knife-stabbing forms the basis of this stereotype, making us forget that there are actually human beings living in the West Bank. Human beings that, like most of us, just want to build up a life, to take care of family, friends and themselves regardless the oppression and the lack of human rights they suffer from. My first encounter with ‘The Palestinian’ was back in the Netherlands, many of whom are co-students at my university, and none of them fitted the stereotype. This triggered my interest about the country, the conflict and the people living there.

I started reading reports and papers on the country and the conflict, I talked to people who are from Palestine, and my impression was that although the Palestinians are being suppressed, discriminated and left in the cold by the Israeli, the Palestinian government, and a majority of the international community, they are trying hard to build up a life. To test my impression, I wanted to go there myself, live with locals, experience and capture life in the West Bank. That is what I did. For three weeks I travelled the country, met the people and lived with them, capturing unique images and stories.

I stayed for four days in Aida Refugee Camp where I did a project around life in the camp. The camp is located in Bethlehem and dates back to 1948, the Nakba, when 700.000 Palestinians were expelled from their homes. The citizens from the camp are originally from 17 villages which are now occupied territory and since 2000 physically separated by a wall that borders the camp at two sides. I experienced first hand what impact the wall has on the people living there. Although illegal under international law, the wall is still standing. In the camp, this wall is an inevitable part of everyone’s’ lives, reminding them daily of their limited freedom.  I made friends with the citizens of Aida camp, kids, parents, and whole families. It is a close community and understandably, they are a bit hesitant towards newcomers as their faith in humanity is tested daily. However, the moment that they saw my genuine interest in the country, they adopted me almost as family. From out this point of view I captured life in the camp. I visited the project ‘Musicians Without Borders’ which provides musical classes and lunch two times a week for all kids from the camp. Besides these encouraging efforts to bring joy in the lives of these kids, I also witnessed the grief of a father over the killing of his son. 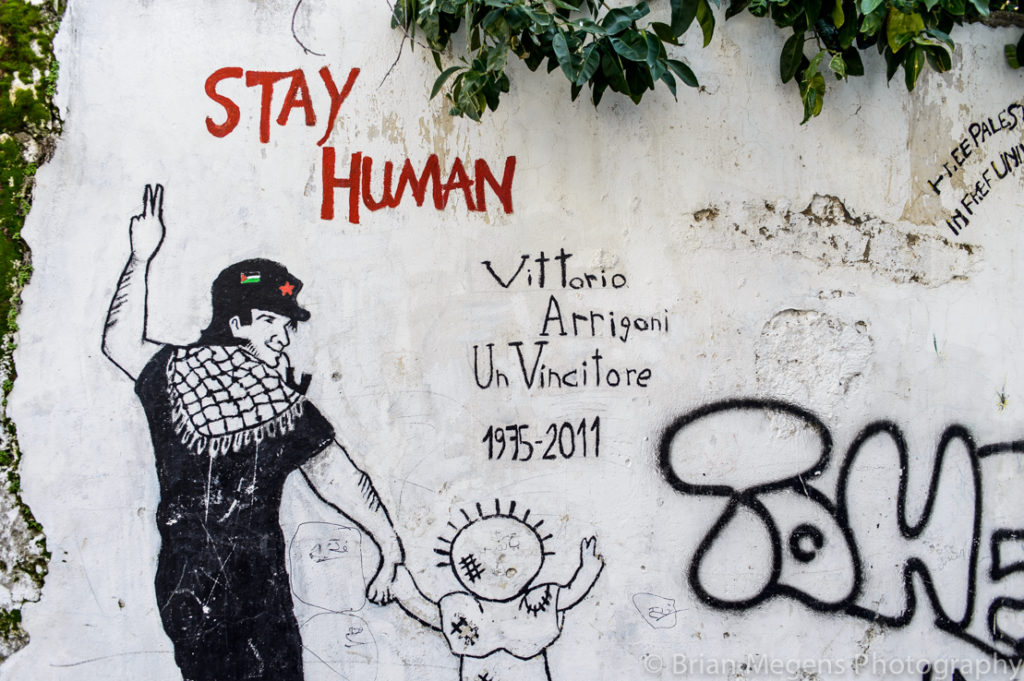 Another interesting place is Hebron where I built a project around the situation in the old city centre and the Kufiya factory. The old city centre of Hebron is occupied by settlers who claim the land on religious grounds. Besides carrying M-16 weapons themselves, they are also protected by heavily armed soldiers. I met a Palestinian family who are living right next to the settlers. They try to make a living by trading the famous Kufiya which is made in Hebron by the last factory in Palestine, the Hirbawi family. I visited the factory to capture the craft of the Kufiya and the symbolic value of it for the country. Sadly, Chinese production has forced a lot of factories in Palestine to go out of business making the factory in Hebron the last one standing. Back in the Netherlands I started Pure Palestine, a social entrepreneurship aiming at making the original Hirbawi Kufiya available for the people in Europe and by doing so support local production and give something positive from Palestine.

As the conflict is so dominant, one tends almost to forget that there are people living with other problems besides the occupation. In Ramallah I met and interviewed the president of the ‘Benevolent Society for the Deaf’ which aims at awareness creation, training and representing the needs for the deaf people living in Palestine.

At the Birzeit University I met students whom are trying to make a future through education. The Birzeit university is well known in the West Bank as the university with the most modern culture.

Although the project focuses around life in the West Bank, Jerusalem is of upmost importance for Palestinians due to the holiness of the city with the Al-Aqsa Mosque and the Dome of the Rock. Sadly, only Palestinian residents of Jerusalem can visit these sites without special permits as they have an Israeli ID.

Although the West Bank itself has a great variation in culture, there is a there is great tolerance for peoples personal religious beliefs as Christians and Muslims live side by side and respect each other.  Although circumstances are extremely tough, people try to live and make the best of it, always keeping the hope of a better future.
I am working on getting my story published and hope to come with new information on it soon.

Peta Pixel, one of the biggest online photography platforms in the world published my photography essay which includes parts of ‘The Other Side of Palestine’ project.

During PechaKucha Maastricht Vol.29 I did a talk on my photography project: